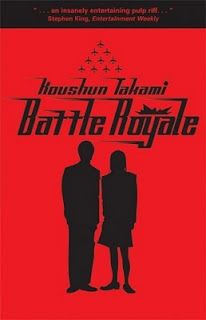 Battle Royale is a novel about a class of junior high school students who are dumped on an island by the government of the Republic of Greater East Asia - an alternate timeline Japan - and forced to kill each other. The winner gets credits and freedom while the losers, of course, die. To up the ante, each student is given a survival pack with miscellaneous supplies and a random weapon inside. Each student has a collar put around their neck which is said will explode if the students break certain rules, and there are time limits and forbidden zones that keep everyone moving around the island, forcing confrontations that might otherwise never happen.

The story itself is brilliant. Touted as being extremely controversial, especially for the time it was released, the book opens up all sorts of doors to conversations and thoughts about psychology, murder, survival, love, loyalty, and moral ground.  I enjoyed how the different characters were brought to the page - and there were a lot of them. It was fascinating to see the paranoia that the very situation sparked in most every student and the different reactions because of it. Some of the students refuse to kill, instead trying to take pacifist actions that most of the time ended up getting them killed. Others develop, or rather bring to the surface, the cold-blooded killer instincts that the game has given them an excuse to execute.

Merciless killing, gratuitous gore and themes of friendship, love and redemption come shining through the books otherwise grim and gratuitous themes. While most of the plot arcs were a bit predictable, there were some nice surprises along the way and I found myself quite surprised and happy with the ending. I found myself constantly stopping to question what I would do if placed in a similar situation. The book also gave me a bit of appreciation (not that I didn’t already have it) with the freedom that our great country gives us.

Some drawbacks to the book were constant grammar errors and typos. These might be attributed to the fact that the book was translated over from its original Japanese text, but there still should have been a better editing job done on it. Those mistakes weren’t enough to detract from the books overall feel, though I did have to stop at some points and try and figure out what was trying to be said. Some of the scenes in the novel required me to heavily suspend my  disbelief, with some of them even crossing the line and forcing me to wonder how so-and-so got out of a blaze of bullets unscathed.

Some of the ways these students hack-and-slash their way through the island they are trapped on makes me a little weary about how students of their age bracket (15+) get their killing motives, though that’s really where the psychology questions come in. The book is gory and blood-drenched, but honestly I became slightly numb to the descriptions by the end of the novel because a lot of them were either outrageous or just repeated too many times.

Overall, I would give this book a hearty 4½ out of 5 stars. It’s definitely worth the read. If you cringe at slash and hack, I would steer away from this since, as I mentioned before, it is a bit gory. There are touches of romance, and definitely some great moral themes to spark off in-depth conversations with others.
Posted by Unknown at 9:55 AM