To Be or Not To Be - Edgy Christian Speculative Fiction 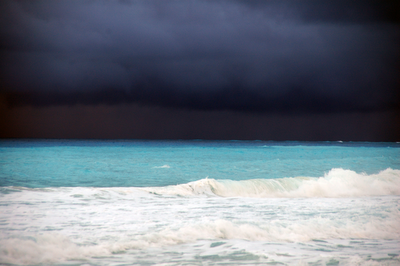 When I originally started writing the first book in my Black Earth series, End of the Innocence, I vaguely referred to it as a Christian sci-fi/fantasy novel. In the book, some of the characters are of the Christian faith and there are some faith-based themes that run throughout. After a while though, I kind of fizzled out the idea of labeling my work as Christian fiction, mainly because I felt there was some edgy content that just wouldn't make it very far in the Christian fiction market.

In a 2-star review that was recently given to Black Earth: End of the Innocence, the reviewer commented on how she was puzzled why the book's description or at least the genre it was classified in didn't clue her in that the book was Christian fiction. I get the feeling she thought she might have been tricked somehow, but that wasn't my intention. I'm not here to wrap a sermon in a story. I simply want to entertain others with my fiction. The old adage, write what you know, is exactly why I have some characters that are of the Christian faith and I have some of my themes lean more toward an all-powerful, loving God and His relationship with creation.

Aside from the negative review, I have also received many positive reviews, some commenting on how happy they are to have found some science fiction with Christian themes, or Christian fiction that isn't corny.

And I guess that's where I've been at a dilemma.

See, my stuff isn't exactly appropriate for the typical, mainstream Christian fiction market. There are sexual scenes, there is violence, and there are curse words in some of my stories. Aside from those issues, there are alien races, other planets, time travel and other realities...many things that some Christians don't believe should be considered Christian fiction, let alone things that Christians should be writing about in general. Science Fiction/Fantasy and Christian fiction always seems to be at odds with each other, with very few authors taking the risk to bring about the genre mix.

So, since some of my writing has the makings of an R movie, that means it falls into the mainstream fiction slot for sci-fi/fantasy, right?

I've been trolling the Amazon forums here and there to see what readers have to say about self-published writers and their behavior online. I've run across more than one forum that discusses how readers thought they were 'tricked' into reading what they thought was a mainstream novel only to find it was a thinly veiled Christian sermon. Some of these acts of trickery I have found to be quite intentional on the author's part. That just gives Christians and Christian fiction a bad rap.Some of those instances aren't all that intentional though. I venture to assume there are other writers like myself that wonder what side of the fence their fiction lies. Although I don't feel I have the makings of a sermon in my stories, they do contain faith-based themes.

Now before any of you leave me a comment to tell me that genre really doesn't matter, it does. It matters a lot. The genre our fiction falls into determines the demographic we are going to market to, the categories that Amazon.com and Createspace are going to drop us in, and will even influence the direction our blog and other social networking endeavors will go. Genre is a sort of target you put on your work so others can see where it really fits in the scheme of things.

What really breaks the dilemma down into a manageable issue is another question. "Why are we not marketing our books for what they really are?". Is it just because we're afraid of criticism? Afraid of the hot debate that might ensue if we show a bit of violence, a steamy scene, or a bit of crass wording? Don't get me wrong, I don't believe these things need to be overdone for them to work in a story - whether that be a Christian story or a secular story - but I do feel they have their place in fiction.

Moving the debate on what is or isn't appropriate in terms of Christian fiction on the back burner for the moment, I'll address my quandary from a strictly marketing point of view. Regardless what genre our book falls in, if we don't market our book as such, we're losing out on the readers who enjoy that specific genre. As narrow as that crowd may be, they should be the first that we reach out to try and gain attention for our books.

Well, enough monologuing. Here I go. For those who want to know, for those who care, I'll step out and call my work for what it really is:

For those who write/appreciate this sort of genre, drop me a line and lets work together to get works of this nature out to those who enjoy their faith-based fiction with a bit of bite and a bit of the fantastical. :)
Posted by Unknown at 11:27 AM

I am currently running a giveaway for what I believe is considered edgy Christian fiction. The book is Running Black by Patrick Todoroff. Check it out and stop by to enter to win a trade paperback copy so you can compare your work.

I will say that when reading your books it is obvious where your faith lies but I never felt preached to. It seems as you say that you write what you know and since you know the beliefs and are a believer yourself it becomes a somewhat prevalent theme with your characters. After all isn't the goal of a good book to give you characters that you can understand and relate to? I think that people who believe in Christianity will have an easier time relating to your characters their faith is just a facet of their overall being so it shouldn't be a decding issue on whether to purchase your book or not.

My 2 cents went much further than I expected lol.
Scott

I always enjoy your two cents, Scott. And I'll check out the giveaway right now!