I did a book signing at the Tucson (Grant) Bookmans this last Saturday and I had a blast. I was there in February promoting the first book in my Black Earth series and I was amazed at how much fun a book signing could be. I was not disappointed this time when I came in to promote, sign and sell copies of my second novel, Black Earth: The Broken Daisy. 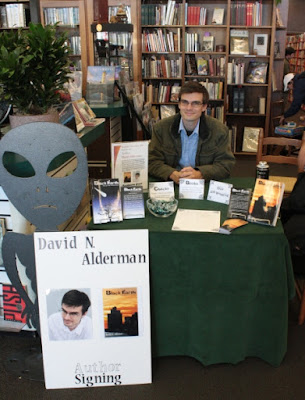 Travis, the event coordinator, made me feel right at home as usual. The store was having Sci Fi Saturday, so a welded sculpture of an alien was put by my table. A great touch! I managed to sell a dozen copies of the book, and some of those were put on the shelf of the book store. Travis even let me prolong my signing a bit since I had driven all the way to Tucson to do it. Instead of a two hour signing, we managed to stick around for about five hours. I met some great people and just had a great time. 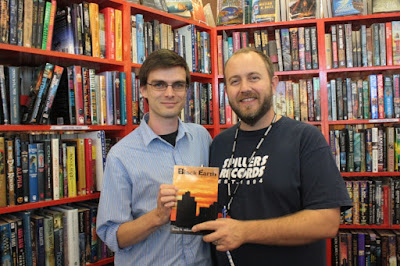 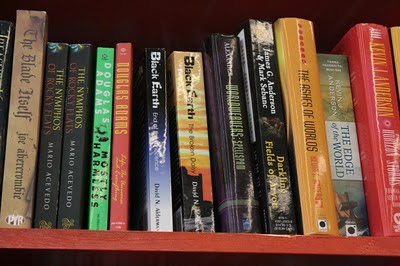 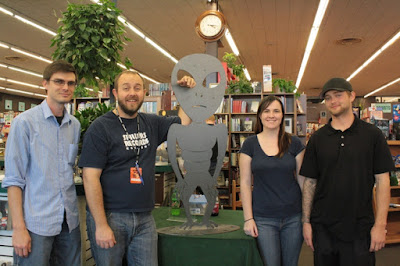 One thing that Travis said to me really stuck out. He said I had one of the best attitudes he has seen from an author in a while. We got to talking about how difficult a signing can sometimes be, especially to try and get people to purchase books from an unknown author, and Travis commented on how positive my attitude was even if I wasn't selling tons of copies.

And that's really the key, isn't it? Attitude. Yes, I am an unknown author. Yes, it's difficult convincing people to take a chance on me and purchase copies of my book - that goes for in person and online.But if I get too discouraged, if I let myself get too depressed about how the odds aren't all in my favor, it shows. It shows to the person who has allowed me to come in and do an event in their book store, it shows to my family and friends, and it shows the most to those who are approaching me, asking me about my book, teetering on the edge of purchasing a copy of what I've poured my blood, sweat and tears into.

Travis' comments really helped to open my eyes to how important it is to keep a chin up and keep a positive attitude about what I'm doing. I believe that God has a purpose in everything, in every book that someone purchases, in every discussion I have with a fellow reader. And whether or not you believe in God, each person that does end up getting a copy of your book has agreed to enter your world, has agreed to take a trip that you've guaranteed to some extent they will enjoy. That's trust that they are putting in you. And even if only a few dozen people put their trust in you in your lifetime, would it mean your writing is insignificant? Of course not.

Han Solo once said, "Never tell me the odds." I think the Star Wars quote really embodies the very attitude writers - and everyone else out there who is following their dreams - need to have. Forget the odds, forget the numbers, and just go for it. Go for it with everything you've got!

I'll be in the Tucson area again this coming Saturday doing a signing at the Speedway Bookmans, so if you're in the area, come drop on in and say hi. I plan on it being a successful one. ;)
Posted by Unknown at 8:21 AM