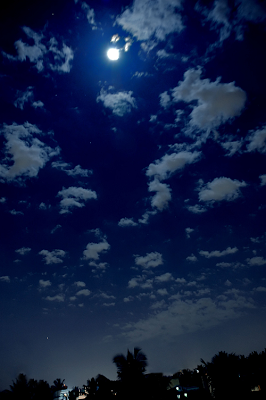 Dreamer - noun
1. a person who dreams.
2. a person who lives in a world of fantasy; one who is impractical and unrealistic.
3. a person whose ideas or projects are considered audacious or highly speculative; visionary.

I have found it to be a curious thing lately that most people seem to attribute the title Dreamer with the second definition in that list. A very negative definition. A person with their head in the clouds, their eyes in the sky looking for things that don't exist. Someone not grounded in reality.

When did it become this way? When did we get so bogged down in the normal and mundane that we decided to cast criticism and cynicism on those who make the decision to reach for more? Those who fit the latter part of the third definition: Visionaries?

I've had this concern for a while now. I don't even have to take a look at our world to notice this epidemic. I see it enough in those around me. Close to me. In fact, many of them are the ones casting this title my way. Dreamer. Unrealistic. Impractical. Ridiculous. All because I strive for what is considered impossible.

The true dreamers cross the boundaries of what society and convention say is possible/impossible. Yes, they count the cost. They take into account what they may lose or gain crossing that line. They weigh everything carefully, and then they make the decision - the tough decision - that the rewards will far outweigh the sacrifice.

I understand there is a line between someone pursuing their dreams and someone saying they're pursuing their dreams. The former works toward their goals. The latter simply talks about their goals until they are enraptured by the feel-good emotions that follow their talk. The former pour out blood, sweat, tears, and sacrifices to achieve the dreams residing within their beating hearts. The latter pour over notepads scribbled with their dreams, with the potential their dreams hold. The former see the edge and step over it, regardless of the naysayers, in spite of the consequences. The latter see the edge and stand by it, taking in the cheers of those who support their decision to cross the line. But they never cross the line. Not like the former.

I am a dreamer. A dreamer for God. He whispered promises/dreams in my heart so very long ago, and I have held onto those like they were a locket close to my chest. I have not let go of those promises - those 'impossible' dreams. And I never will. If God is anything, He is faithful. And if I am considered the second of those definitions because of this - a person who lives in a world of fantasy; one who is impractical and unrealistic - then that's fine with me. The haters will hate. The naysayers will naysay. Those who don't want to cross the line will always be full of jealousy for those who do. They hate on those who venture into the unknown, who leave the surety of life and its trappings to explore the fantastic and the wondrous - the places they wish they themselves had the courage or faith to venture into.

Which are you? A dreamer or a sayer? An adventurer or a scribbler? It's time we break the mold. It's time we counted on God for more than just a feel-good Sunday sermon and trusted him to take us into unknown realms. Moses believed God would part an entire sea. Joshua and Caleb believed the Israelites could defeat the giants found in the promised land. Gideon believed God could destroy an army of 135,000 with only 300 men. Yes, I am referencing Old Testament accounts. It's because the Old Testament is full of men and women who believed God for the impossible, for the miraculous.

These days, I don't see as much of that going on. That's not to say it doesn't - there are some who are currently believing God for great and impossible things. But not many. I do believe God calls many to marvelous things, but those individuals either don't believe God could possibly bring them to a place to receive them, or they simply give up along the way.

I'm reminded of some of the lines from Switchfoot's song, Awakening -
Last week saw me living for nothing but deadlines,
With my dead beat sky but, this town doesn't look the same tonight
These dreams started singing to me out of nowhere
And in all my life I don't know if I've ever felt so alive,
Alive

What dreams are singing to you? A new business? A new book, painting, song? A move to a new land? Why are you squelching those dreams? Why are you tossing them aside as impossibilities? If God has birthed those dreams within you, surely He will see you through as you pursue them.

"Now the God of peace...equip you in every good thing to do His will, working in us that which is pleasing in His sight..." Hebrews 13:20,21 NASB

Wake up, my friends. Don't let your circumstances dictate how your life will pan out. Rise. Fight. Take hold of those dreams singing in your hearts, and pursue the things of God with confidence, courage, and faith.
Posted by Unknown at 9:09 AM

Beautiful post, David. And very true. Most people in this day and age do think of "dreamer" as a negative term, used to describe someone who isn't afraid to reach for their dreams, and isn't afraid to cross lines.

We grow up being told we can be anything we want to be... until what we want to be becomes something people see as impossible. Then those encouraging words change. As adults, we get so wrapped up in being realistic - and the way reality is today, realistic is quite pessimistic. I remember my eldest daughter... she was going to be a famous singer. My eldest son wants to be in the NBA. "Reality" has already affected my singer... and is working on my basketball player now, although he continues to work hard towards his goal. And as parents, we often want to encourage them to find new goals.... more "realistic" goals. I try very hard to keep this pessimistic view to myself, because I remember what it was like to be a dreamer.

Yes, God can help us reach our dreams if we're willing to put hard work and effort into it... and more so, if we're willing to trust in him and let go of our fears. And that is usually the problem... "reality" makes us fearful of reaching for those dreams. It makes us fearful of trusting in a God we cannot see (though, if we look hard enough, we can).

That's too bad about your singer, Rianna. I've had countless people come into my life who let reality steal their dreams, and it's a sad thing to watch, let alone experience when it's you whose dreams are being stolen by society's pressure to be 'grounded' more. Glad you liked the post though. These thoughts have been on my mind for a while now and I figured it was a good time to pour them forth.

Amen!It's because of people, like you that keep me dreaming! Helping refocus my eyes on my IMPOSSIBLE dream. But God! But GOD can only make that impossible, POSSIBLE! Thank you for the encouragement! Excited to see how God uses you and your family! :)