The End is Here

Today is the official release day for Black Earth: Exodus, the fourth and final full-length novel in my Black Earth series. The road to this momentous occasion has been a tough and trying one - both personally and professionally - but I'm very glad to present to all of you the final chapter in my edgy Christian speculative fiction series... 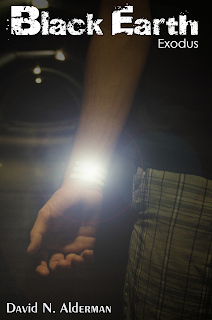 In the midst of the world's darkest nightmares, light shines the brightest...

In what began as a star falling in the distant Phoenix sky, Legion's invasion of Earth has led Nathan Pierce through the twisted depths of the human spirit in search of his family and truth. After a bloody and brutal confrontation with the President of the United States in Echo city, Nathan and his friends find themselves on a new path leading through the Broken Lands—toward the city of Providence, California, the battleground upon which humanity will make a stand against the Dark Army and Legion itself.

But as Nathan's group journeys through bomb-ravaged cities and demon-infested highways to reach Providence, those determined to put an end to Nathan's life enact a final plan to stop him, his friends, and humanity as a whole. An offer is made to rewind time and put back the wrongs that Professor Grey’s time travels have caused. Everything can be restored. But at what cost?

While war rages across the planet, the fragmented shards of Shadowbanish come together to form a weapon that can finally tip the scales in humanity's favor, but only if the hero can endure the trials of Earth’s final days.

Black Earth: Exodus can be purchased in paperback at:
Createspace
Amazon.com

and in ebook format at:
Amazon.com (Kindle)
Barnes and Noble (Nook)
Smashwords (Other Formats)
Posted by Unknown at 9:00 AM