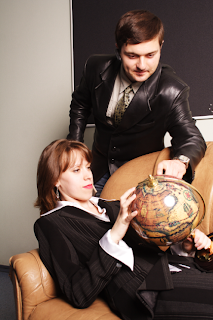 Years ago, when I first wrote and self-published the first two novels in my young adult series, Expired Reality, I really thought I had created a believable, compelling world that my readers could get lost in. I made up a planet named Anaisha (the ai is prounced the way it is in the word pain) and simply gave it the same attributes that Earth had. I figured that would save me a lot of trouble, preventing me from having to create minute details about another world that I didn't really care to take the time to build up properly.

Now that I'm going back through the revisions to those novels, I've realized my grim mistake. Simply making up another planet and giving it all the same attributes as Earth just because I didn't want to put the time into getting creative is lame and boring and it does me no good for a series that I plan to run across the next 5-10 years.

I've sat and analyzed what I think I might have done wrong, step by step, and am taking the necessary measures to make sure these mistakes don't carry over into my recent revisions -

** First, I built an unbelievable fact into my world - there is no religion. In the original manuscript, I simply ran my story under the assumption that religion was outlawed - across the entire planet. Not only was it outlawed, but there were no religions that people were secretly believing in and practicing. The only exception I made to this was a strange cult obsessed with four elements - fire, earth, air and water - that lived in underground sanctuaries away from the eyes of the world powers.

The big problem with this? Completely unbelievable. Would an entire planet that has been populated for at least a hundred years not believe in a higher power or powers? Would the human race not create something to believe in, or possibly discover religions that may have been around since before the planet was even populated with the human species?

To fix this in the revisions, I begin by incorporating the government's intolerance for the belief of gods or higher powers. That's believable enough. I've added fictional gods and mythologies that have been passed through Anaisha's history. These stories and beliefs are found in certain texts, hinted at in the speech of some of my characters, and even found etched in the stained glass of the staluses - special buildings erected for the purpose of weddings, funerals, and memorials.

To add some spice to these beliefs, I make sure there is conversation/texts that coincides with designs found in the constellations, giving more weight to the people's beliefs of such gods and supposedly mythical creatures.

** Second problem? Confusing planet with continent. In the original writings, I stated that the planet's name was Anaisha and that most of the character's interactions took place in Western Anaisha. That's pretty broad. Too broad. An entire planet with numerous different land masses, continents and areas and I boiled it all down to naming a certain half of the planet and stopping there? Sure, I dotted the terrain with cities, but that was it.

My solution was easy enough. The planet is Anaisha. The main continent my characters live their lives on is called Enera. There are other continents as well, with names that will be revealed throughout the series. Inside of Enera are the cities that I originally had set up. This gives my world a bit more realism in terms of geography instead of trying to paint a broad stroke and leaving very little to work with people's imagination.

**My third problem came when I tried to set up the government/political system of Anaisha. I originally stated in the novels that I had a president that ruled over everyone and that was the end of the story. There were police and judges and a normal judicial system much like what's on Earth. Along with that there were Anaisha Sentries - special armored guards who patrolled the city streets and enforced the law when the police were not able to.

As much as having one president to rule the entire world might have been something I got away with in the past, I wanted to add some more depth to my novels this time around. So now there is a president who resides over the continent of Enera and a mysterious figure who is actually thought of as the ruler of all of Anaisha - sort of a like a king. The president actually answers to this man - as do the Anaisha Sentries - and there are other presidents/rulers over the other continents and regions, but all answer to this mysterious figure whose face and identity have supposedly never been seen before. (The details of this mysterious figure will end up being hinted at throughout my other series, Black Earth.)

** My fourth and last really major issue I found with the old manuscripts was the lack of wildlife/creatures. It's another planet for crying out loud! No mention of fantastic creatures (aside from demons) or strange insects or anything else of the like.  An amazing creative opportunity blown.

To rectify this grievous atrocity, I've started working on creature and beast building. Aside from dragons (which in the story so far have only been envisioned) and demons, I'm creating the deadly serpents who fill the waters surrounding Galtaia Penitentiary, horrible beasts who lurk in the midst of Anaisha's numerous islands, and the mesmerizing insects populating the entire planet of Anaisha. Mythology will play an important part, especially when the characters get deeper into the series and start traversing the far reaches of Anaisha.

Building a fictional world is hard work, but the details are necessary. It's not always an easy task using Earth as an environment for your characters, but it can be even more challenging building your own planet from scratch, one that your readers are hopefully going to want to hang out in for a while.
Posted by Unknown at 6:21 AM

he big problem with this? Completely unbelievable.

I love how you go back and review your work, looking for the good and the bad.

Yeah, I think I've come leaps and bounds from where I was at as a writer a few years ago. It's always a learning experience. :)