As my friend Jelani continues work on the cover for Endangered Memories - the first book in my upcoming young adult series - I have been busy messing with the cover to Picture Perfect, a novella in the same series. Picture Perfect's cover is made entirely from scratch by yours truly using Gimp. When I showed the original design to Jelani, he gave me a few pointers on what needed to be fixed with it. After a trip to the drawing board, I am very happy to reveal the new cover.

First off, here's the old one for those who haven't seen it or don't remember what it looks like - 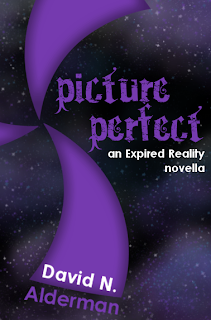 And here is the new cover design - 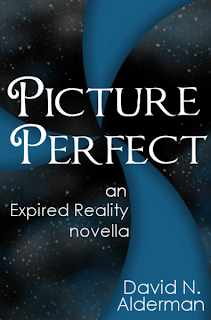 Notice the purple font for the title in the first version? First off, I really started second guessing that font as soon as I published the cover. It just doesn't fit the series very well - it has more of a magic, fantasy feel to it when the series itself is a bit more science fiction/fantasy. The original font was Gartentika in case anyone was curious. I get the majority of my fonts at dafont.com because you can find free ones for commercial use there. The new font is called Chocolate Box. Great font. Also, the purple color for the title in the first cover is real bad - makes it blend in with the rest of the cover. White is much easier to read.

See how the spiral symbol is positioned in the original version? My friend suggested I have all ends of the symbol run completely off the page. It was mentioned that when I have the ends of the symbol showing up in different areas on the page, then people's eyes are going to run to those spots instead of elsewhere on the cover.

And notice how my name is in two different colors and at an odd angle in the original? I thought I was being clever with that. But the new version is soooooo much easier to make out after it was suggested my name just be one color. The reader should be able to make out my name without having to stop and figure out what the different colored words are at the bottom of the cover.

For a final touch, I switched up the color scheme. The purple was great, but I want to use purple for another character's side story. I think the teal/blue looks a lot better for this cover and is much more pleasing to the eye.

I'd love to hear what you all think of the change. I'll more than likely keep doing the novella covers myself while I have my friend illustrate the young adult novel covers. I can't wait to show you all what he has come up with. Soon. Very soon!
Posted by Unknown at 4:21 PM

The new cover looks so much better.