Back in 2010, when Black Earth: End of the Innocence - Book 1 in my Black Earth series - was released, I also released five separate flash fiction stories that I inconspicuously hid on my website for fans to find. Since close to nobody knew what the Black Earth series was even about, I didn't have much success getting the stories read. 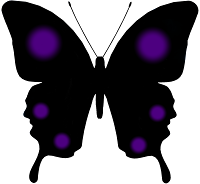 Now that I've dug them out of the vault, here is the second in the series, giving a little glimpse at Howard Grey - and even Veronica Amorou from my Expired Reality series.

Black Butterfly -
Howard Grey ducked down beneath the window as the black shadows moved past the vacant office building. He felt the dark presence of Legion moving through the street outside and it troubled his heart. He held his breath as it passed him and continued on into the city.

He peered up, seeing the empty street and the black sky overhead. It would take him a while but he had to try and get back to his house, get to his laboratory where his time machine was at. It was the only hope their world had left.

Grey turned around and started shuffling through papers and folders that were on the desks in the small, unkempt office. He knew she had put her message somewhere in here, but he wasn’t sure where. After digging around for about five minutes, he found the small purple cylinder with the black butterfly painted on it. She had hidden it in a random, or what he thought to be random, desk drawer.

He sat down in one of the office chairs and popped open the cylinder. Out slid the piece of parchment, rolled up into a small scroll. Unraveling it revealed her final message to him:

I am safe. That is all I can say. You don’t need to worry where I am because I have taken precautions to make sure even you cannot find me. This is simply to ensure my own survival and make sure that I am able to live long enough to fight the darkness that has engulfed our world. I know that you and I haven’t seen eye to eye on things as of late, but that is okay. You and I will always do what we feel is best to protect Anaisha and that is all that really matters.

Please do not concern yourself with my well-being at this point. I know what you are aiming to do and I truly hope that you succeed. I cannot join you on your adventure through time because I feel called to follow another path. Not the path of darkness that you have so kindly accused me of a number of times now, but a path that will hopefully put an end to Legion and its hordes, an end to Evanescence and her malevolent rule over this world, an end to everything evil.

Take care. You and I will always share a friendship, no matter how far our paths stray from each other. I feel it necessary to warn you that the Dark Dragon knows where your house is and will no doubt be watching over it to warn the evil witch when you have arrived there. She knows nothing of what you are up to and I hope to keep it that way.

I will miss you. Never forget the losses that you and I have shared, the friendships we have lost to this gruesome war. My love for David will only grow stronger with his absence from this world, and I will use this love to keep moving forward, to do what I can to save humanity from evil’s tight grip. He will not have died in vain.

May your travels be blessed, now and in whatever time you journey to.

Grey sat back in the chair, holding tightly to the piece of old parchment. I will miss you immensely, Veronica.