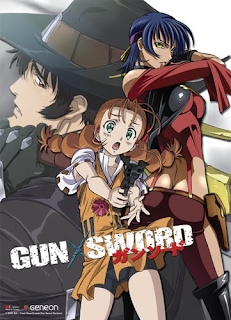 Before browsing the anime category on Netflix, I'd never really gotten the whole 'anime craze'. I mean, I've been subjected to some - albeit minor - anime influence: Yu-Gi-Oh!, Xenosaga, Voltron. A friend of mine attempted to introduce me to Slayers a few years ago - a series I completely lost interest in halfway through the movie. At one point, anime just looked like a bunch of cartoons with mechs, heavenly-busted women and emo dudes running around doing...anime stuff.

I know that comment probably sounds pretty ignorant, but I'm being honest here.

To expand my horizons and educate myself on the finer things in life, I took inventory of Netflix one day and decided to just dive into a series and see if I could get past my hang ups.

I am so glad I started with Gun x Sword.

This series is quirky - as I'm quickly noticing a good portion of anime series are - but just serious and dark enough to keep my attention. The series is comprised of 26 episodes, each running a little over 20 minutes long. And when it was all over, I scoured the internet to make sure there weren't more seasons or episodes that Netflix was hiding from me. I enjoyed it that much. 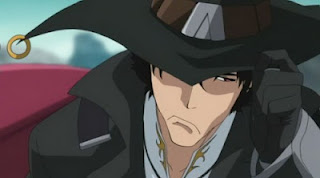 The series begins with the main protagonist, Van, saving a small town from bandits while on the hunt for the man with the golden claw - a nefarious villain who killed Van's wife. Wendy, a young girl living in the town Van saves, decides to follow Van on his journey as she's searching for her missing brother. Their travels take them across the Planet of Endless Illusion, through seedy towns and sprawling cities. All the while they run into other characters who develop their own reasons for joining Van and Wendy on their quest.

What I love most about this series is its commitment to character development, from Van's mysterious background slowly unfolding through each episode - along with his hatred for the man who killed his wife, to Wendy's somewhat naive and needy nature maturing into the strong and tested core of the woman she eventually becomes. Although each episode feels incredibly short, there is just enough story material and development in each that when the ending theme song rolls around, I feel as if I've read another chapter of a book I just don't want to put down. 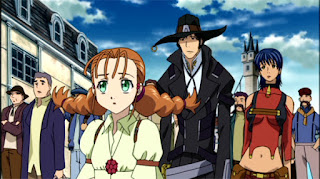 Despite certain episodes being what I would consider over-the-top quirky - a group of baddies who fight with their mustaches?! - the antics never felt as if they pulled attention away from the core conflict - Van's search for vengeance and Wendy's search for her brother. Yes, there are busty vixens, and some innuendo sprinkled throughout, but it never felt overkill or as if it drew focus away from the story. The series contains enough twists and turns to stay original and compelling, and even though I've never been a fan of mechs, this series kept me glued to the screen, especially during the epic battles between the Armors. Two other great things this series had going for it was the animation - I am highly picky, and the great music which only enhanced the grand adventure that is Gun x Sword. 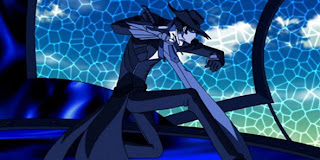 If I had a rating scale for anime - which I may employ at some point down the line - I'd give Gun x Sword five stars. It made me appreciate anime for what it can be - compelling and memorable. I was left thinking about this series long after the final credits rolled across my television screen.
Posted by Unknown at 8:15 AM

Bleach and Full Metal Alchemist are two of my favorites. Basilisk is also pretty decent. I think all of them are on Netflix right now.

I'm currently viewing Darker than Black. It's pretty good so far. I might dive into Bleach on your reference - I've heard some things about it but I haven't ever taken the time to check it out.