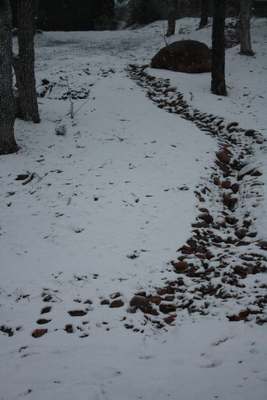 So, a couple years ago, I decided to do something nice for some of my fans for the holidays. I created an exclusive collection of short stories taking place in my Black Earth series, all that take place before the first volume in the series, End of the Innocence. I printed this collection out, numbered each individually, and mailed them out to my fans as a Christmas gift.

I've been meaning to resurrect one or two of those stories and post them, so here's one as a treat for your Wednesday. I'll be adding these to my website at some point in the near future and may even create an ebook collection you can read on your Kindle or Nook or whatnot, but we'll see.

This particular story is about Alpha 1. I included humor in these Christmas shorts, so they may not seem as 'dark' as the novels in the series.

Alpha 1 stood, staring out the window at the snow falling outside. The hotel room was five stories up and gave him the advantage of being able to see the snow-capped mountains in the distance. Europe was beautiful this time of year, and it gave him the opportunity to relax. He didn’t mind killing people; it was just hard to do it 365 days of the year. He needed time to rest. To relax. To clear his mind.

He took another bite of the Michelina’s mac and cheese and swallowed it down with some hot cider. He watched out the window as a big white van pulled into the parking lot and dumped out a group of people. It looked like one huge family. They were all carrying gifts, and one or two of them were wearing Santa hats.

Ridiculous, Alpha 1 thought to himself. The holidays, in his opinion, had become too commercialized and too religious. Why couldn’t everyone just celebrate winter for what it was—winter? Instead everyone had to attach a stupid religious meaning to it. The birth of Christ? What kind of nonsense was that? God coming down here to this wretched place as a baby? Dumb.

Alpha 1 took the last bite of his dinner and tossed the empty container and plastic fork into the garbage can. He stood up from the table and stretched, realizing he wanted to take a walk out in the cold before turning in for the night. He slipped on his heavy jacket and opened the door.

There, on the floor in the doorway, was a small package wrapped in black and red wrapping paper with a large red bow on the top. He slid his right hand to the gun under his left armpit and glanced around the immediate area. There was nobody within sight who looked suspicious—just a couple of kids fighting with each other down the hallway a bit, a young couple holding hands as they made their way to their room, and an old man carrying a large present toward the elevator.

Alpha 1 removed his hand from his gun and picked up the small package, withdrawing into his hotel room with a slam of the door. He set the package on the desk that overlooked the window and stared at it for a moment. There was no tag on it. Just wrapping and a bow. He tried to figure out what it could be by its shape and size…maybe a book, or a movie. Maybe even a game. Who the blazes would leave him a gift? Maybe Santa, he thought cynically.

He picked up the package and started to unwrap it, hoping it wasn’t a bomb. He knew many, many people who would love to see his dead corpse be blown through the window. The thought  kept him on his toes, but also kept his adrenaline running twenty-four-seven. Made it hard to relax.

He finished unwrapping it and realized it was a book…a manga, to be exact. It was Pokemon!

Alpha 1 let himself smile. This was a limited edition Pokemon manga, one that he hadn’t been able to find in the normal comic book store. But who? He opened the front cover to see if anyone had signed it. There was nothing there but a little heart colored in pink pen. What?

He opened the door again and peered into the hallway. Nobody. The kids, the old man and the young couple were all gone. He shut the door behind him and started toward the elevator. The least he could do was go for a nice chilly walk and then head back to the room to start reading. Who on Earth would know he liked Pokemon? Some of the guys in his Alpha team did, but they wouldn’t dare give him a present, especially on what many believed was Christmas Eve.

He took the elevator to the bottom floor and walked outside. The snow was still coming down, and it felt good against his warm skin. As he made his way across the side of the hotel, he came across a man dressed in a Santa suit ringing a bell, asking for money.

“Sir, could you spare some change?”

“I’m already bringing change to the world, old man. Get a life.”

The man stopped ringing the bell and stared at Alpha 1 for a moment. “Well, that’s not very nice.”

Alpha 1 stopped and turned to the Santa. “Do I look like a nice guy to you?”

The Santa took his time answering.

“The answer is no! I’m not a nice guy. I don’t care for your Santas or your stupid Christian holiday. You ask me for money again, and I’ll make sure you don’t wake up to see the snow fall tomorrow morning.” With that, Alpha 1 turned and continued past the hotel and onto the street the building sat along.

“Alpha 1, didn’t know harassing Santa Claus was in your profile.”

He recognized the voice immediately, although he didn’t remember seeing her on his way out here. Alpha 1 turned behind him, and there stood Victoria Angeles smiling at him. Better known to him as Alpha 28.

“What are you doing here?”

She shrugged. When she did, Alpha 1 noticed the beautiful green sweater she was wearing. It matched her bright teal-colored eyes. “You and I have a mission together tomorrow. I found out that you were staying in the same hotel as me, so I thought I would say hi.”

He couldn’t stop smiling. It made him sick. “Are you the one who gave me the gift?”

She nodded. “I knew you were having trouble finding that copy, and so I pulled some strings and found it for you.”

He wanted to say thank you, but it was so incredibly against his nature that he could only nod.

She laughed. “I’ll take that as a thank you, Alpha 1.” She took a few moments to stare at the ground and then looked up at him, a nervous smile on her face. “So...the mission tomorrow is going to take us into Italy. After we kill the group of Scorop activists, you wanna grab a bite to eat? Maybe we can catch a movie while we’re at it.”

He chuckled. “Only if you promise to leave me at least half of them to kill. I wanna try out my new gun.”

“You know I don’t like to make a mess. As long as you clean it all up when we’re done.”

She nodded. “Okay, then. It’s a date. I’ll see you in the morning.” With that, she walked back toward the hotel.

Alpha 1 was nodding, but then he stopped and, with an angry expression, glanced up at her as she entered the hotel.