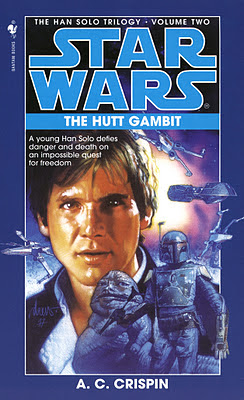 As I sail through my 2012 reading list, I am really glad I decided to start it out with my favorite series of all time - the Han Solo trilogy by A.C. Crispin. I am now in the second novel in the series, The Hutt Gambit, and in this second installment, Han finds himself kicked out of the Imperial Navy with a Wookie - Chewbacca - glued to his side, indebted to him for saving the giant furball from slavery. And so starts the next chapter in Solo's adventurous life.

I love reading about Han's first confrontation with Boba Fett, learning how he and Chewbacca became the best of friends, and discovering where Lando Calrissian fits into everything. This chapter of Han's saga also explains how he obtained the Millennium Falcon. The Hutts make a grand appearance, and it's interesting to get an up-close look at Hutt politics and society. We also get a glimpse at some of Han's romantic relationships - post Bria, and pre Leia.

Although I am enamored by A.C. Crispin's writing of these epic novels, this book is not without a minor flaw or two. My biggest complaint is that at times - especially during Han's interactions with some of the smuggler folk of Nar Shaddaa - the dialogue seems to get a bit corny and seems to lose its rugged Star Wars feel. I found myself laughing at the way some of the smugglers interacted with each other, especially during the period they are planning their defense against the Imperial's invasion of their planet. That minor annoyance is not enough to make me want to put the book down by any means, but it was clear there was room for improvement in terms of dialogue and character personalities.

One thing I really liked about this book was that it begins to weave many subplots that become vital story lines later in the series and in the Star Wars universe as a whole. This includes the drama between the Hutt clans - including Han's first interactions with Jabba, Bria Tharen - Han's ex love - and her contribution to the formation of the Rebel Alliance, and the tightening of the iron fist of the Empire. This is definitely a great series to pick up before or after watching the original films, as the events in the novels lead up to the point we first see Han in A New Hope.
Posted by Unknown at 8:00 AM

It's great that you're soaring through your reading list. Reading really helps the writing process, at least for me. It's like when I finish a book or a movie, I really want to write. For instance, me and the boyfriend watched the Fellowship of the Ring yesterday. And, right afterward, we both went into a writing frenzy.

As for my thoughts on Star Wars, I don't really have any. I know my dad and boyfriend like it, but I haven't tried it yet.

Yeah, I get the same way after I read - I want to write like the wind. And I think Fellowship of the Ring will get any writer in the mood to write.

When you say you 'haven't tried it yet'...do you mean you haven't seen a Star Wars movie or read a Star Wars book?