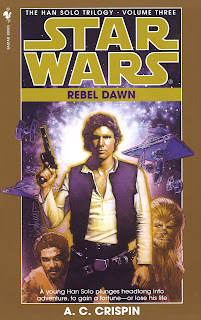 In this final volume of the Han Solo trilogy, we're treated to the background on how Han won the Millennium Falcon from Lando Calrissian, a very epic glimpse into the world of Kashyyyk and some of Chewbacca's family, including his bride, and we get to see more of how the rebel alliance formed with the help of Han's old flame, Bria Tharen.

I hated getting to the end of this series because, as I've stated in my  reviews of the previous two books, this is by far one of my favorite fiction series. A. C. Crispin weaves a beautiful and yet tragic recollection of Han Solo's life, years before he meets up with Obi Wan Kenobi and Luke Skywalker in the cantina on Tatooine.

The Empire is growing in power and spreading fear across the galaxy. The Hutts are in the middle of a war between their clans, and Han is trying to live the single life and enjoy the spoils of the spice trade and his incredible piloting skills.

When Bria Tharen seeks to destroy and pillage the spice colonies of planet Ylesia where she was once held captive as a slave before Han rescued her, she enlists the help of Han and other smugglers to help get the job done. In return, they are promised a cut of the spoils, but even old flames can burn hot and events quickly spiral out of control.

The book - and series - ends in a gut-churning, tragic way that really makes you feel for Han, especially after journeying with him since his childhood aboard the Trader's Luck in The Paradise Snare. This book brings a great end to the series and acts as a prominent bridge to the Star Wars movies. I think A.C. Crispin did a fine job with Han Solo's character and with the story lines. Even if some of them did feel a little bit contrived, they kept me interested up until the very end.

So as I close the cover on the third and final volume in this series, I place it back on my bookshelf and save it for when I'll pick it up again a few years from now, or for when I sit down and read it to my son when he's old enough. Now on to the other books in my to-read pile.
Posted by Unknown at 8:00 AM