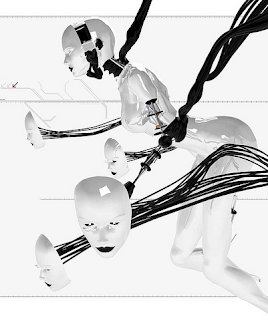 On Monday, we took a look at the character of Evelyn Sun from my Black Earth series. Evelyn is a young girl who changes her appearance and personality to match the desires of one girl - Kari Preen. Evelyn refuses to acknowledge her own personality, her own hopes and dreams, and instead caters to Kari's selfish demands for false friendship and egotistical wants.

Personally, I've seen this behavior one too many times in my life - especially when I was in high school. Kids and adults alike - although kids especially - can sometimes fall victim to so much insecurity that they adopt the persona of someone else, especially someone they look up to. Even I have been guilty of this in my past. Sometimes it's because we want to impress others so badly that we're willing to bend and break just to fit in. Other times, it's simply because we don't have an identity of our own - or we don't know how to tap into our own identity, fearful of what others might think - and so we adopt someone elses.

Characters like this can be used in Christian fiction to showcase the theme of identity theft. Rather, identity surrender. Kari wouldn't be able to take and manipulate Evelyn's identity if Evelyn wasn't so willing to give it up. It doesn't make what Kari does right, but it doesn't excuse Evelyn for her part in the whole thing either.

In my Black Earth series, Evelyn becomes a drone, dependent on Kari's approval and direction - even if the direction Kari is heading in leads only to destruction.

This Friday, Evelyn's character profile will be added to the Compendium, and next week we'll dig into the character of Heather Rhodes and the part super powers and magic can play in Christian fiction.
Posted by Unknown at 8:00 AM