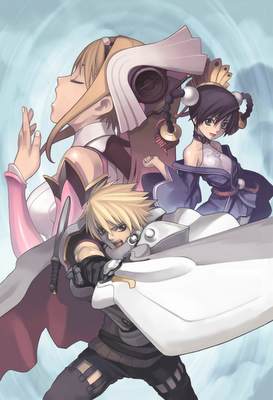 I used to only enjoy first person shooters and some platform games, but over the years I've fallen deeply, madly in love with RPGs. Currently I am busy building my collection of old PS2 classics like Star Ocean: Till the End of Time, Final Fantasy XII, and Rogue Galaxy.

There is, however, another game (series) that I attempted to play through a while ago - Ar Tonelico - and quickly quit, due to its...strange nature. I'll admit, years ago, aside from the Final Fantasy series, I didn't dabble in many Japanese RPGs. At one point I stumbled across the Persona series and, after getting part way through the story, thought: What kind of weird stuff is this?

Funny, I know. But lately I've made it a point to start appreciating video games for their artistic expressions along with their gameplay value. When I picked up the first Ar Tonelico game, Melody of Elemia, a couple years ago and played through it a bit, I found myself somewhat embarrassed and feeling childish for entertaining myself to such a strange - and some might say perverted - game.

Well, I'm all grown up now boys and girls, and I'm taking another stab at the series...and I'm loving it. 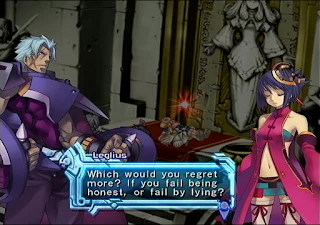 The basic premise is the world is about to be destroyed and you have to save it. Usual RPG plot. But these games are anything but typical RPG fodder. They are a mashup of platformer, RPG, and even have some mild dating sim elements.

The most unique thing about the games is the female characters called  Reyvateils. They have the ability to sing songs that release magic to help you in battle, but in order to help them craft this song magic, you have to go to a dive shop and 'dive' into their cosmosphere, or soul space. If that sounds a little dirty...it's meant to. The games take a very tongue-in-cheek route to the male libido. Dialogue in the game is borderline perverted - if taken out of context - which it's hard not to, especially when the back of the first game's packaging states, 'You never forget your first,' and the second game's packaging states, 'Always come back for seconds.' 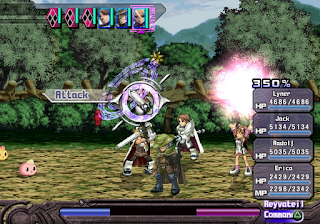 For those who wonder how far this game goes in bringing sexual content to the table, the games are rated T (not M) for suggestive themes and partial nudity - at least in the case of the second in the series. However, as a comparison, I played Final Fantasy XII and it states on its package that it too is rated T for partial nudity but I think it was only because of some of the character costumes, which I guess according to some prude gamers can be considered risque. Personally, I found nothing warranting the partial nudity claim in that game. And from what I can tell so far, Ar Tonelico is not a porno series.The innuendo is brought into the game in a somewhat humorous fashion alongside all the quirkiness a Japanese RPG is known to have, at least from my experience.Initially, the innuendo is what turned me off from the game, only because I had never played a game of this caliber before. But if one takes the time to move past the immature - yet most times hilarious - dialogue, there is a true gem of a game underneath.

Ar Tonelico has traditional RPG elements - you fight enemies, gain experience, level up, craft items. It all makes for a fun time. Most of the time on the playing field is done up in 2D sprites. The game then switches to beautifully illustrated cutouts during character dialogue. Overall, the presentation is nice and easy on the eyes. A welcome change to other RPGs I've played in the past, and even to some I've played recently on next-gen systems. 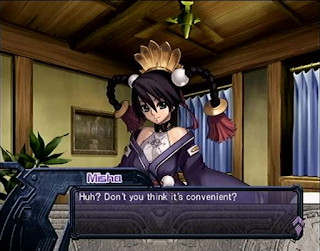 The real heart of the game though is the Reyvateils' cosmosphere. The objective is to dive into their subconscious and help the Reyvateils battle their inner demons. There is a deep psychological aspect to this realm - the Reyvateils will struggle with acceptance, insecurities, dark sides to the bubbly or snobbish personalities they exhibit on the surface. There isn't anything particularly challenging, gamewise, to getting through these areas, but it's fascinating to take the trip into their inner most realms and help them work out their less illustrious traits. Doing so enables the Reyvateil to craft powerful song magic you can use in battle, and helps the Reyvateils to enter a paradigm shift, which enables your character to move to a deeper level of the soul space and a deeper level of the Reyvateil's innermost being. I can't recount one other game I've played that takes such a unique approach to the psychological aspects of a video game character.

I know some of the people in my circle of friends and family would immediately shun this game for the sexual content - most of which is innuendo - alone, but I think the core of Ar Tonelico has an entertaining story and rich enough gameplay that you don't see much of in today's next-gen video games. 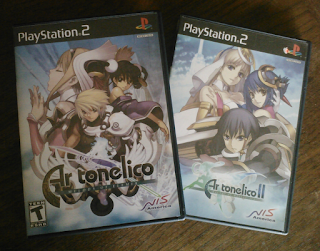 I managed to nab both Ar Tonelico: Melody of Elemia and Ar Tonelic II: Melody of Metafalica a little while ago and am currently playing through the first of the series, Melody of Elemia. There is also a third game that just came out in the series, Ar tonelico Qoga: Knell of Ar Ciel, but that's on the PS3 and I don't plan on getting a PS3 anytime soon. Though donations are always welcome. ;) For now, I'll enjoy these guilty pleasures in my epic game collection.
Posted by Unknown at 8:00 AM

The artwork certainly is beautiful, that's for sure. My boyfriend is big into RPGs too. Me, I'm not ashamed to admit that I just can't really comprehend it all. Too many numbers, too many stats...my mind does not compute. In terms of video games, I'm only good at family games like Mario Kart or Mario Party or Dance Dance Revolution. FPS and RPG games are for the boyfriend.

Also, I'm definitely not surprised about the innuendo, lol. I'm a big anime fan. So much of the inspiration for my stories comes from anime, which can be VERY perverted. But I'm a lot pickier about my anime. There's lots of really cool, deep anime out there that explores human nature without having panty shots, big eyes, and innuendo. Heck, I've learned many lessons about life from anime.

Yeah, those ridiculous sexual tendencies in anime are reasons why I have a hard time finding any good anime to get into. If one was just getting into anime and wanted to pick up something deep and entertaining, what would you suggest?