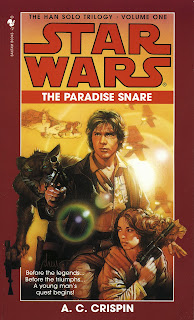 It was my senior year of high school - 1997 - when I first picked up this fantastic book and immersed myself in Han Solo's adventures. This book did for me what so many books I've dived into haven't been able to - it pulled me into another world, it made me feel the emotions of the characters, it made me lose track of time. This book easily became a portal for me to a whole galaxy of adventures and it's a book - and a series - I will never forget. This series has been on my shelf for quite a few years and I decided to start my reading challenge this year by reading through these books again just so I can remember why I love to read.

After Han Solo escapes Trader's Luck and crash lands on the planet of Ylesia to take a job as a pilot, he runs into beautiful Bria Tharen - a lonely colonist working the glitterstim mines (and who later becomes an integral part of the Star Wars universe, especially in events leading into the original Star Wars movies.) Han finds that the religion on Ylesia isn't all it's cracked up to be and he, Bria, and Han's planetary bodyguard, Muurgh, decide to flee the planet after they steal some priceless artifacts so Han and Bria can start a respectable life somewhere else in the galaxy.

What I love the most about The Paradise Snare is how closely it captures the character of Han Solo I grew up. The novel details some of Han's backstory as a very young thief in the form of wonderfully crafted flashbacks. Growing up on the streets, and in space aboard a pirate ship, one can see where Han gets his somewhat arrogant and selfish personality seen in the movies. But really, that's just the beginning of what makes Han trust nobody but Han. In this first installment in the three-part series, we find out how Han develops his loyalty toward Wookies, we witness his first interaction with the Hutts, and we watch as Han falls in love with beautiful Bria Tharen - and is nearly destroyed because of it.

I originally read this series when I was about 18/19 years old, and I just remember the book filling my head with Han's fantastic adventures and remembering how badly I wanted to have my own. That's the purpose a book should fulfill - to whisk you to far-off worlds and enrapture you in the fantasy and science fiction of a great read. This book accomplished that on an epic scale. A.C. Crispin's writing is crisp, and lends to the book's effortless read.