What Jack Bauer Taught Me About Creating Compelling Characters 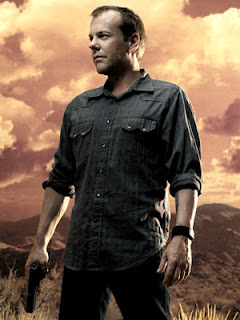 Anyone out there remember Jack Bauer? 24? It was - and is - only the greatest television show of all time.

I'll gush for a moment: I'm a total 24 addict. I was since the beginning of the first episode, and I continued to transform into full-blown fanboy geek by the time Fox aired the last episode of the eighth season. I own every DVD set including 24: Redemption - the made-for-TV movie, along with various comic books, graphic novels, soundtracks, TV Guides, and anything else that had to do with Jack Bauer, 24, or anything in the realm of those two things.

I was obsessed. I'll admit it. Still am a bit. A man crush? Maybe. I'm not ashamed.

Jack Bauer become my all-time favorite character...of all time. Of every book, comic book, television series and movie I ever subjected myself to in my lifetime, the character of Jack Bauer enthralled me more than any other.

Because his character was compelling. His character was edgy, tragic, heroic. The character of Jack Bauer fell somewhere in the gray area of morals and ethics. He did things he didn't want to do because he knew he had to do them if he wanted to succeed in his mission in keeping the world - and his home/family - safe and secure.

Jack was an antihero of sorts. He rebelled against convention, he went up against the powers-that-be to unveil corruption at its vilest, and he risked the few for the many. He wrestled with the demons of his wife's death, he went up against his own brother and father who were corrupt, he killed an innocent government agent to appease a terrorist - and to save hundreds of people. He made the tough decisions you and I hope we never have to face in our lifetime. He wasn't just a good government/rogue agent - he was an effective agent. He got results, and didn't care what had to be done to achieve those results.

His character helped me in my own writing ventures. When I realized that 'good' characters aren't always good, it dawned on me that I had been raised to believe otherwise: good is good, bad is bad. There are definite boundaries that define the difference between the two, but when you're fighting terrorism at the level Jack was, where the bad guys don't play fair, where the lives of innocent people are on the line, a simple moral/ethic rulebook can't be followed. It has to be thrown out. One man - Jack Bauer - was there to save the day, save the world, even if he had to sacrifice part of himself and/or his relationships in the process.

Jack's character inspired me and helped influence some of the behavior of my own character, David Corbin, an ex-hero from my young adult, scifi-fantasy novel series. In one particular scene taken from Lost Birth, the second novel in the series, David, through a chain of events, finds himself in a jewelry store where the object he's been searching for - a necklace that is said to unlock an ancient timepiece that can save the world - is located. The cops and mall security are on him, and so he does the only thing he can faced with his impossible circumstances: he takes one of the jewelry store employees hostage. (My inspiration from this scene came from Jack's own actions in Season 4, episodes 3 and 4, when he holds up a gas station and takes hostages to buy himself time to catch some terrorists.) In doing so, David puts the jewelry store employee's life at risk, and in the end, his choice has tragic consequences.

Jack Bauer opened my eyes to the full potential my own characters can have. And even though 24 isn't airing on television anymore, he'll always be somewhere near my writing desk, adding to my muse.
Posted by Unknown at 8:00 AM

It's really cool that you have one big inspiration like that. I don't really have one favorite character. I just have a confused jumble of many characters from the hundreds of things I've watched and read. I've heard of 24, but I've never seen it. Now I think I wanna give it a try.

You should definitely give the show a try, Tiffany. You'll get sucked in with season 1, episode 1 and you'll never look back.