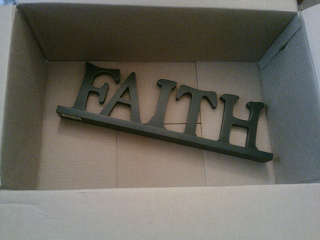 It's a term I've heard thrown around lately, and I can't help but wonder if it's actually more demeaning than it sounds. Some try to put a positive spin on it and call it 'Extreme Faith', somehow implying that there are levels of faith that eventually reach a plateau in the preposterous. But it's the same idea - faith that looks somewhat ridiculous because it goes beyond the norm or expectations of society.

When I have the time to reflect on my life, I come to many interesting conclusions about God, faith, and life here on this side of eternity. One of those conclusions/observations is that God, over the years, has been calling me and my wife to walk across narrower and narrower ledges of faith. In simple terms, He's been calling us to give more of our lives over to Him and trust Him - have faith in Him - to do more with those areas of our lives than we could possibly do.

Isaiah 55:9 - "For as the heavens are higher than the earth, So are My ways higher than your ways And My thoughts than your thoughts."

Ephesians 3:20 - Now to Him who is able to do far more abundantly beyond all that we ask or think, according to the power that works within us...

It should be no surprise to fellow Christians that God wants ALL of us. Every part of us, every nook and cranny of our lives, every single thing. This simply means that we trust - or have faith - that God will take care of the things/people/situations that are precious to us. Surprisingly, not many Christians walk this out - at least not to the fullest. I'm here to challenge people to wake up and take stock of what God is requiring of us.

Let's look at it this way - if God can do immeasurably more than we could ask for or imagine, and if His ways are higher (infinitely better) than our ways, then why wouldn't we want to abandon all this stuff to Him and allow and trust Him to make it better? It sounds like a decent trade - our crap for His best. But not many look at it like that. In fact, many people (yes, even fellow Christians) look at giving things to God as foolish...

We give 10% of our income believing - in faith - that God will do more with that 10% than we could ever do with the 90% that's left over. We look foolish because this 'theory' does not follow the mathematical equations this world is built around.

We quit high paying, stable jobs to follow God's calling, sometimes into the unknown. We look foolish because giving up a sure thing that gives us economic security to walk out something in faith goes against our base human survivalist and materialistic tendencies.

We save ourselves sexually for marriage because we have faith that God has the perfect individual for us - when His timing is right. We look foolish because sex is given as a free commodity on the world market. I mean, who turns down pleasure that's free?

Walking out in faith in a world that's consumed with solid, material things that can be seen almost always looks foolish to those who don't add the "God factor" to the equation. And what's funny, is most of the time when Christians see other Christians walking these things out - things they themselves wouldn't walk out if called to do so, they slap the "Crazy Faith" or "Extreme Faith" label on it, as if that justifies their own lack of faith to walk out the same.

I've had many people shake their heads at me when I tell them half the stuff my wife and I are called to on a daily basis. I got into a discussion with a good friend of mine recently and out of it came the theory that perhaps my wife and I are actually called to live out more extreme faith than other Christians, that there is a wide path, a narrow path - and then there's us walking out on the edge of the narrow path.

I guess I wouldn't go as far as saying we're called to that type of faith. In reality, I think faith is faith, and how far and wide your faith stretches all depends on your perspective of God. Do you trust him with a little, with a lot, or with everything? There's a big difference between those three. I don't want to keep ANYTHING from God. I'm not saying it's easy to lay everything down at His feet on a daily basis, but I am saying that's what God is expecting from us.

And that's not cray cray faith, or extreme faith, or super faith. That's faith. That's trust in God. That's confidence in His ability to do more than we could possibly imagine.
Posted by Unknown at 2:32 PM No comments: