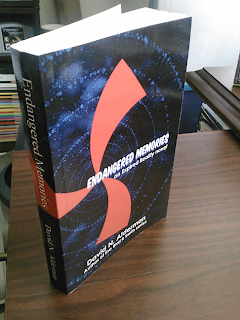 Just recently, I took advantage of one of the rewards of winning NaNoWriMo last November - 5 free copies of my book from Createspace. Seeing how I never actually ordered any paperbacks of Endangered Memories when I revamped the cover design at the beginning of the year, I went ahead and ordered five copies and now display them magnificently on my desk. I found though, that like many of my books, I will sometimes pick it up and start reading it. And lately, by reading a lot of my older works, I can feel my passion for writing returning in full bloom.

This isn't to say that my passion for writing ever went away. It just got a bit buried under the monumental task of moving here to the Bay Area, getting acclimated in a new place, and trying to get back into the groove of online marketing and whatnot.

With that being said, I'm also happy to say that I'm back at work on Dark Horizons, thanks to Camp NaNoWriMo. I have a lot of great ideas for this installment in my Expired Reality series, and I hope to write them all out and get this manuscript done as soon as I possibly can, seeing how it's been on hiatus for the last few years. Starting as a nearly 60,000 word draft, Dark Horizons will pick up where Lost Birth left off and continue the story of David Corbin and both his search for the Codex of Ra'f and his battle against the emergent Legion.
Posted by Unknown at 3:28 PM No comments:

With yesterday being the official start of Camp NaNoWriMo, I took some time to sit down, open up my old NaNoWriMo draft of Dark Horizons, and scanned the book to see how badly this thing would need to be overhauled and rewritten for Camp NaNoWriMo.

Boy was I surprised.

This manuscript is an absolute gem that's apparently been sitting in a digital folder since August of 2011 - the same month my son was born. After perusing the nearly 60,000 word manuscript, I've come to the conclusion that my Camp NaNoWriMo goal needs to be changed. This draft of Dark Horizons has a nice edgy feel to it - one of the main reasons I was going to rewrite it to match it up with the feel of my Black Earth series. It also follows most of the plot lines I was going to write the new manuscript in. And I can't ignore the fact that already 56,888 words are written in this thing.

The beautiful thing about Camp NaNoWriMo is that it can be used for edits, revisions, or alternate word counts. Unlike its big brother, NaNoWriMo (every November), Camp NaNoWriMo allows you to set your word goal to one other than the typical 50,000. So, I'm going to take advantage of this and set my goal to 43,112 words. Seeing how my manuscript draft is already 56,888, this would bring the draft to 100,000 words by the time July is over with - the perfect size for a first draft.

Today and tomorrow I'm going to be spending some time chiseling out an outline for the manuscript, and then after the holiday weekend, I'll be starting work on the 43,112 words I need to complete before the end of July.
Posted by Unknown at 2:21 PM No comments: