I love to write. 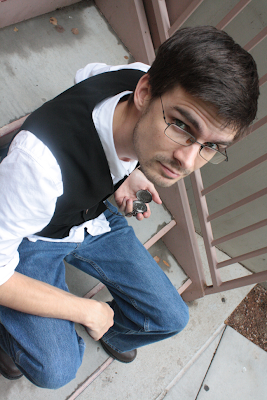 My love for writing began at the age of eleven when I began writing fantastical stories about a young man and his friends and their adventures taking down the world's most threatening criminal organization. Even though I'm thirty-three now, married, and have a child of my own, those characters who allied themselves with me back in 1992 still live with me to this day. Within me. And each day I attempt to translate their tales into inky glyphs on paper or pixels on a computer screen. Their stories are more than mere fiction. These characters help to make up the character of me. I am the heroes. I am the villains. I am the good and the evil. I am the depressed and the misunderstood. I am the beaten, the downtrodden. I am the underdog. I am all of them, and all of them are me to some degree or another. To write their stories is to recognize and acknowledge the many facets, however strange, of my own personality.

A good portion of my life is devoted to writing, and in that regard, to self-publishing. I already tried to go through the traditional publishing channels years ago and ended up with a nice little collection of rejection slips - and those were just from potential agents. It was at that point I realized I didn't want to waste my writing life waiting around for someone else to see something of value in me or my writing. I saw it for myself, took hold, and decided to go the road of self-publishing. I won't lie, it's been a rough road, but it's been so worth it. It's a funny thing when people ask what I do for a living. I say writer and they are either so entranced by the fact that I've had the patience to sit and write a book, or they scoff or roll their eyes or attempt to stifle a laugh. What they don't know is what goes on behind the writing curtain. Sometimes I find I have to stifle the urge to justify what I do for a living by launching into a grocery list of the many hats I wear as a full time, self-published author. This profession, this bitter love of mine is my cross to bear, my poison to drink. And I only say that in regards to the mixed bag of difficulties and rewards that writing - and self-publishing - offers.

To be a good writer, one must love to read to some degree. My childhood especially was heavily influenced by reading. I remember reading Mark Twain’s work in my youth and falling in love with the characters of Tom Sawyer and Huck Finn. I remember reading terrific and sometimes horrifying short stories like Edgar Allen Poe's, The Cask of Amontillado andThe Pit and the Pendulum, along with James Thurber’s, The Secret Life of Walter Mitty. My senior year of high school I read through the Han Solo trilogy and fell in love with science fiction/fantasy and the Star Wars universe in its entirety. Nowadays I have an entire shelf full of books that have made their own requests to be read, including Stephen King's Dark Tower series, and Ted Dekker and Tosca Lee's work.

Beyond writing, beyond reading, I find that I love to spend most of my 'free' time in the world of video games. These days it seems there's a negative stigma attached to the air surrounding those who 'play video games'. We're sometimes looked at as lazy, irresponsible, neglectful of our 'real' lives. That's not the case, at least not with a good percentage of us. Video games are an artwork all their own. Combining music, storytelling, animation and voice acting, they are the epitomy of the arts, many talents coming together for ones entertainment - or sometimes ones escape. And it's okay to escape into the world of a video game every now. It's not much different than using a book or a movie to escape into a world of fantasy and intrigue.

It's an interesting life, this life of a writer and self-publisher. The comment I hear most out of the mouth of those I speak with is that they wish they had the patience to sit down and actually write a novel. To be honest, writing THE DRAFT of a novel is the easy part - it's everything that comes after that that shows the true nature of a self-proclaimed author.