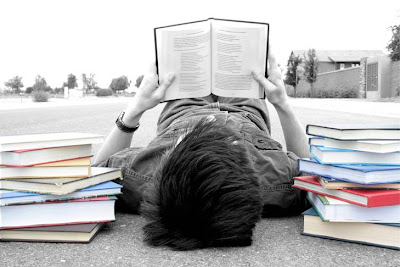 Here I am at the beginning of another year, with a desk covered in books that I still have yet to read. Some of them have been sitting here for over a year now and it's really starting to irritate me. On top of these, I have two books I promised other authors I would read - which are first on my list.

A few weeks ago, I made the decision to list the books in order of what I want to read when. The following are a few noteworthy ones, while my list is at the bottom of this post...

The first novel, or series, on my list is The Han Solo Trilogy by A.C. Crispin. If you are friends with me in Goodreads, you'll notice I have these three books listed as read already, which is true. The thing I absolutely love about these books is that I can read them over and over again and never get sick of them. I originally read The Paradise Snare, The Hutt Gambit, and Rebel Dawn when I was a senior in high school and immediately fell in love with them. Of course, I am a fan of Star Wars in general, but the way Crispin wrote these really gave me some insight into Han Solo, my favorite Star Wars character, and also gave me inspiration to draw from when creating characters of my own.

Number six on my list is to finish the Dark Tower series. I've read The Gunslinger, The Drawing of the Three, The Wastelands and Wizard and Glass. I have The Wolves of the Calla on my desk and have yet to purchase Song of Susannah or The Dark Tower (final book in the series thus far). I even have Stephen King's Everything's Eventual in my collection, a nice little short story compilation with The Little Sisters of Eluria - a Dark Tower story - in it. Aside from the aforementioned Han Solo Trilogy, the Dark Tower series has by far become one of my favorite of all time.

The twelfth entry on my list of books to read this year is House of Leaves by Mark Danielewski. By far one of the most bizarre books I've purchased, I heard of this novel about a year and a half ago and it took me about a year to find it used, which I did in a local Bookmans. House of Leaves is the story of a young family that moves into a house which they come to discover is actually bigger on the inside than it is on the outside. The book is written in an unconventional style with some pages coming to only a sentence or a word, and the style of the typesetting adding to the book's horror feel. Other pages contain highlighted text, footnotes within footnotes - some referencing books that don't exist, and even poetry. I've been fascinated with this unusual format and have wanted to read the book not just for it's plot, but for the way the book is put together.

The seventeenth entry on my list is the entire Bourne novel series. I've seen the films - loved them - and have been wanting to read the books for some time now. I have four of the books on my desk - The Bourne Identity, The Bourne Supremacy, The Bourne Ultimatum and The Bourne Legacy. I know there's eight in all so far, so I'll probably need to make another trip to my used bookstore to grab the remaining four when I get to that point.

Along with the list, I am also reading other non-fiction books on the side, both to better improve my writing and character design and to improve my marketing skills: - Bullies, Bastards and Bitches by Jessica Morrell, Writer’s Guide to Character Traits by Linda Edelstein, Blogging Business by J.S. McDougall, The Freelance Success Book by David Taylor, The Complete Guide to Self-Publishing by Tom and Marilyn Ross, The New Rules of Marketing and PR by David Scott

***This list does not include Star Wars novels, save for the Han Solo trilogy. I have an entire stack of Star Wars novels, and I am trying to decide which order I want to read them in. I would really, really like to start reading the Star Wars books in chronological order, so it's taking me time to collect them from used book stores. This list also does not include the comics I am trying to catch up on - Fathom seasons 1,2 and 3, Executive Assistant Iris, and Cyber Force Hunter Killer - nor does it include the two novels I am trying to read by good author friends of mine.

And, as a final note, there is one other fiction book I am reading on the side that is not included, only because I'll be reading it here and there in the midst of everything else - The Zombie Survival Guide by Max Brooks.

So many books, so little time. Here's my list for anyone that would like to compare. If you've read any of the same books, let me know what you thought. No spoilers though, please. ;)

1. The Han Solo Trilogy by A.C. Crispin
2. On Writing by Stephen King
3. The Night Angel Trilogy by Brent Weeks
4. Timeline by Michael Crichton
5. Dust by Elizabeth Bear
6. Finish the Dark Tower series by Stephen King (Need books 6 and 7)
7. The World of the Short Story by Clifton Fadiman
8. The Ghosts of Ascalon by Matt Forbeck and Jeff Grubb
9. Eon by Greg Bear
10. This Present Darkness and Piercing the Darkness by Frank Peretti
11. Brother Odd by Dean Koontz
12. House of Leaves by Mark Danielewski
13. James Bond: The Union Trilogy by Raymond Benson
14. Everything’s Eventual by Stephen King
15. The Wayfarer Redemption series by Sara Douglass (Need books 2,3,4,5 and 6)
16. Odd Hours by Dean Koontz
17. The Bourne Series by Robert Ludlum and Eric Van Lustbader (Need books 5,6,7 and 8)
18. The Entire Rogue Angel series by Alex Archer (Need book 4 and books 6-28)
Posted by Unknown at 8:18 AM