I've been off the radar for a while now, but I'm back with some goodies in regards to Endangered Memories. I'm happy to announce the cover art is finished - thanks to my good friend Jelani Akin Parham, the back cover copy is finished, most of the formatting for ebook editions is finished, and now I'll be spending the next few days getting the website ready for the book's release the beginning of next week. My official release date is Tuesday, June 14th, and on that day I'll be giving away ebook copies of Endangered Memories so stay tuned to the blog for more details on that.

The first piece of cover art I want to give everyone a glimpse of is Carrie Green, one of the main characters of the book - 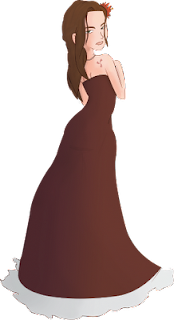 I am more than happy with the job he did with her character design. I wanted to give the cover a young adult feel but nothing too juvenile. I think his artwork captures the balance between the two perfectly.

Next in line is the background, which Jelani did as well -

The city is South Ryshard, where Carrie is living at the beginning of the book. I almost cried when I saw how beautiful the cityscape was and the coloring he implemented in the scenery.

The third element that comes into play with the cover design is the font. I spent many hours trying to find the right fit for the book. When I self-published Picture Perfect, I ended up changing the cover font later because it didn't fit the feel of the book. I'm happy to say I found the perfect fit for Endangered Memories though. The font is called Chocolate Box and you can grab it for free at dafont.com.

I'll be spending most of today putting all of these elements together into a coherent cover design. This Friday I will be posting a sample of Endangered Memories to get everyone geared up for the release next week! And next Tuesday I will officially release the first novel in a series that has been near and dear to my heart since my youth.
Posted by Unknown at 8:23 AM

I would like to sign up for a copy now please :p I can't wait for the release David the art looks great!

Can't wait and I am looking forward to the release