I can't tell you all how happy I am that it's Friday. I love weekends, mainly because my wife is home with me and my son, and I get more solid time to work on writing/self-publishing/marketing related projects.

Speaking of which, here's a little rundown of some of the things I'm currently working on.

For starters, I'm trying out a new schedule on myself to see if I can get be more productive. For a while now I've been trying to squeeze writing and other related projects into the time my son is down for a nap during the middle of the day. It works, just not all the time. As anyone who has a kid knows, they don't always follow the schedules you set for them. The problem with this, is that if my son decides to have an off day, my work suffers for it. I try to use my evenings to compensate, but most of the time my wife and I have plans. 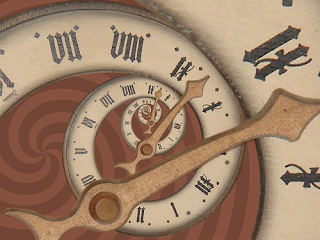 So, to rectify this quandary, I've decided to do something some may think is drastic, but really isn't. I'm going to return to my night owl roots and set 2am as my working punch-out time. This means when my wife and I get done with our plans for the night - or even if we don't have plans at night - I'll have my butt here in this black leather office chair writing - or something relevant to writing - until 2am.

I've been getting up every day at 6am. Sometimes I'm woken even earlier if my son (who has club feet and constantly has issues with his feet hurting him) ends up having a particularly rough night. Mathematically, this means I am only - at best - going to get four hours of sleep. So, I'll be using the naps my son takes during the day to catch up on my Z's, instead of trying to get so much work done during those times.

In essence, I'm simply pulling a switcharoo with my work habits. I used to live and breathe night owl, so this won't be horribly difficult to slide into, but I have gotten older since those days, so it will take a little bit of getting used to - and maybe a bit of Mountain Dew. But it has to be done, because these books/projects HAVE to get finished.

One of the projects I'm working on, as everyone who reads my blog already knows, is Black Earth: Dark Masquerade - the third novel in my edgy Christian speculative fiction series. I've been getting more candid with my writing process and have already posted two major draft excerpts from my work on the novel:

The President's Dark Advisor
(a meeting between President Amanda Stone and her dark advisor, the Man of Shadows)

This book is due in my editor's hands by the 15th of March. And when I send it to her on or before that date, it will be the first deadline I will have kept to without having to alter it because of my poor work habits.

Next project on the list is the Expired Reality Double Pack. Just like I took Books 1 and 2 in the Black Earth series and put them in an ebook double pack, I'm going to do the same for Endangered Memories and Lost Birth - the first two books in my young adult series. I just have to create a cover for it and do some formatting and then a release date will be revealed. I plan on it being soon though.

Another project (well, you can call it a project I guess) that I decided to take on is to be a contributing writer over at Tiffany Cole's website, Reader's Den. I am really excited about this because it will give me the opportunity to reach a crowd of readers/writers that I may not be reaching with my own blog. And I get to contribute to a wonderfully crafted website dedicated to readers and fans of writing. I plan on making my debut post over there in the next week or so, and I'll announce it here before it goes out.

I am also proud to say I am on track with my reading schedule for the year. I have 20 books on my to-read list on Goodreads, and I've already read two of them and am currently on my third. Here's a link to the review I posted for the first book in the Han Solo Trilogy, The Paradise Snare. I still mean to write a review on Awakening Evarun Part II by Thomas Barczak, but know that I gave it five stars. He is an incredibly talented author/illustrator that everyone should be watching very closely.

The third book in my to-read list, which is the second book in the Han Solo Trilogy, The Hutt Gambit, will be finished and reviewed around February 25th. These Han Solo books are easy to review because I originally read them back in '97 and am rereading them because they were just that flippin' good!

One side note I'd like to include is in regards to my website, davidnalderman.com. I have some ideas running through my head on how I want to add some additional content to the website, like character profiles, exclusive downloads, and even a timeline/chronology that will fill readers in on where each of my books fit into the master timeline of both my series. I'll keep all of you updated on those elements via this blog and the email newsletter.

Well, there you have it. A little update from little ol' me. To boil it all down - I'm right on track with my projects so far. This makes me very happy. And I'm sure it will make those of you who have been waiting for more from the Black Earth series - and my writing in general - happy.
Posted by Unknown at 8:00 AM

Thanks for the blog shout out! Also, what another wonderful post. ^_^ I hope the schedule works out for you. I know I sure couldn't do anything on under 6 hours of sleep. I'm having one hell of a hard time finding a solid schedule and sticking to it. How much I get done honestly depends on how much time I'm spending with the boyfriend and how much time gets wasted on morning stuff, like dishes, cooking, and bathing. Blech. And I'll probably be getting a part-time job at some point, so it may be even more complicating.

Thanks again for stopping by, Tiffany. I can usually operate on 5+ hours of sleep, but any less than that and I have issues. That's why I'll be taking some time during the day to nap and hopefully even out my sleep cycle a bit. I started this schedule last night and I actually forgot how much I love being a night owl. It's so quiet and I can get so much work done. It's nice.