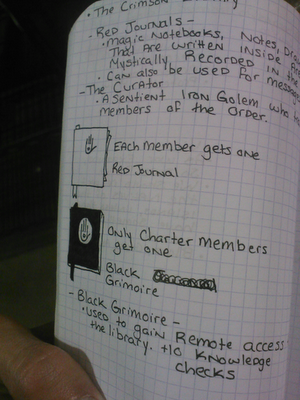 My wife and I went to Goodwill the other day, and  while I was there, I found a mound of journals for sale, most of them in pretty good condition. I perused through them, thinking one or two might be good to pick up and use for writing notes, when I found they had already been written in.

Apparently whoever had donated these books to Goodwill had used them previously, and it looks like they were aiming to sketch out the details to an RPG board or video game. What's interesting is that there were at least two dozen of these books, both in black and red covers, and each was only partially filled with the writer's notes. Some had titles written in Sharpy on the covers, others were blank on the front. I attempted to find one that didn't have anything written in it, but the closest I got was one that had a page of writing and then the rest of the book was blank - so I purchased it for a measly $2.

Before leaving Goodwill, I took some snapshots of some pages crafted from an author whose identity I'll never know - 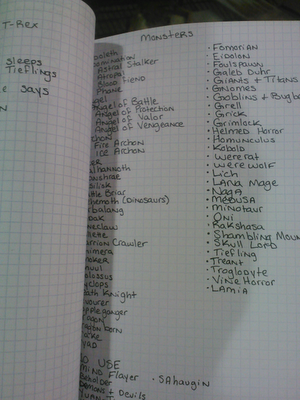 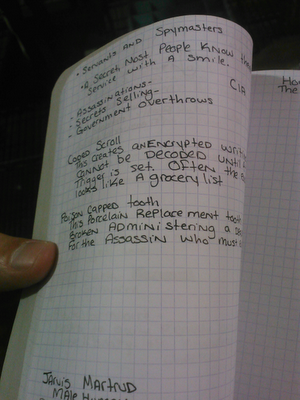 Wow, that's pretty damn cool. You know, I LOVE goodwill, antique stories, and thrift stores. I love the idea that the books I buy, the clothes I buy, have a whole mysterious life story attached to them. For instance, I bought a necklace from a thrift store yesterday. When I look in the mirror, I always think, "This is such a beautiful necklace. I wonder who wore it before me. How did the clasp thing get broken? Why did they give it away, in spite of the clasp?" I like the things I have to already have stories. I like the idea that me taking it is continuing on an abandoned story, breathing life back into something that was near death.

Leave it to me to turn shopping into some philosophical, writerly conquest, lol.

I agree, Tiffany! Every used item has a story behind it, which I find fascinating. In truth, I wanted to purchase every one of those used journals and just sit down over the course of a day and read through them to see what kind of fascinating world and creatures and storylines this uknown author created. But alas, with each journal priced at $2, I couldn't afford it. Oh well. It was a great experience anyway.

That's a very cool find. I've never really looked at anything other than the clothes in my local stores, but I'll have to check out everything at some point to see if I can find any treasures.

Scott, I can find little treasures every now and then. Sometimes all I come across are the basic necessities and even some junk, but every now and then I stumble across something that's just too good not to post about.