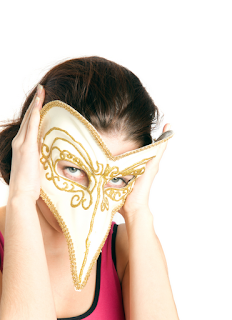 Last week we took a look at Kari Preen, a somewhat minor character in my Black Earth series who exemplifies fake Christians - those who claim to be Christ-followers but instead act completely different in their day to day lives.

Today we'll take a peek at Evelyn Sun - another somewhat minor character in my series. Evelyn was mentioned in last week's blog postings as the young girl who follows Kari around, striving to fit in with the girl, insecure in her own skin.

Evelyn was born and raised in Apache Junction, Arizona in a home where her father physically abuses her. Evelyn only came to the church by invitation from Kari. Kari and Evelyn became friends through the private school that they attended, and for all intents and purposes, Evelyn is pretty much Kari’s chameleon, changing her emotions, personality, and desires to match Kari's. At times, Evelyn dresses like Kari and allows Kari to dictate who Evelyn is going to talk to. At other times, Evelyn simply keeps quiet while Kari verbally berates her.

Near the beginning of the Black Earth series, Evelyn has taken a liking to Heather Rhodes, even trying to talk to her on occasion. But Kari won't tolerate Evelyn showing loyalty to anyone other than her, and so Kari convinces Evelyn that friendship with Heather is hatred toward Kari.

Throughout her time in the Black Earth series, Evelyn represents a chameleon of sorts - one who has no identity of their own, who changes themselves on a whim to become or please a specific person they look up to. Evelyn is a drone, her own emotions, dreams, desires masked in order to allow someone elses behavior to override hers.

On Wednesday, we'll take a look at the theme of identity theft and how it can be used in Christian fiction. And on Friday, Evelyn's character profile will be added to the Compendium.
Posted by Unknown at 8:00 AM