The fourth year I participated in NaNoWriMo (National Novel Writing Month), I crafted the draft to the second novel in my Black Earth series - The Broken Daisy. This was also the year I finished NaNo in only 21 days. Ironically enough, The Broken Daisy has become my longest fiction piece to date - the finished book comes in at over 164,000 words - and is the longest volume in the Black Earth series. 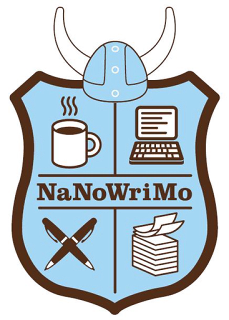 2008 was also one of my favorite years when it came to NaNo's theme. The viking ship was really nice and a step up from previous years' icons, and this was also the same year the viking helmet was incorporated into NaNoWriMo's logo - a great symbol for the challenge that NaNoWriMo offers up each year.

I found out that year too that it's a bit easier accomplishing NaNo when you have source material already written. The Broken Daisy is the second book in my Black Earth series. So in essence, most of the characters were already introduced in End of the Innocence - the first book in the series - as were most of the plot elements. Writing The Broken Daisy was easier because I already sort of knew where the series was going and I knew what all the characters were going to end up doing. For the most part.

My NaNo manuscript at the end of that year's competition came to 50,111 words. That means when I finally (self) published The Broken Daisy, it has more than tripled in size from its NaNo origins.
Posted by Unknown at 7:32 AM