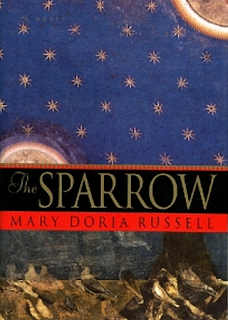 This book was recommended to me by Amanda Liston of Appraising Pages, so I went to my local library and picked up a copy. Needless to say, I'm in her debt for convincing me to read The Sparrow. This novel is one of the best pieces of Christian science fiction I have ever read. I will say up front that a good portion of this review has spoilers, so if you haven't read the book yet, wait on reading this post.

The plot of The Sparrow revolves around an intergalactic radio broadcast received by an observatory here on Earth. This broadcast is a stream of beautiful songs being sung from the planet Rakhat. The Jesuit order decides they want to venture into space and find the origin of this music, and so a team is assembled and sent to the alien planet.

In the beginning of the novel, we're introduced to Emilio Sandoz, a Jesuit who is the only survivor of the crew sent to Rakhat, currently on trial for supposed crimes he committed while on the alien planet. As the novel unfolds - switching between Emilio's debriefing (and somewhat inquisition) and the actual events that occurred - Emilio's story is unraveled for the reader to find out why Emilio's hands are maimed, why he is a wreck physically, mentally, and spiritually, and what really happened on Rakhat.

The preparations taken for the journey to Rakhat, and the actual travel there via a mining asteroid, aren't the main focus of the story, although these pieces of The Sparrow help to introduce readers to the wonderful array of unique characters. The book centers most of its plot around Emilio Sandoz, a priest who has sworn celibacy and is looked on by the Jesuit order as somewhat of a saint in regards to his relationship and closeness to God. What is fascinating though is that by the end of the book, Emilio is questioning if God even exists, and if He does, Emilio concludes that God is a merciless monster.

Emilio's struggle with priesthood, celibacy, and God's existence are scattered throughout the story, but in such a real way that I actually became teary-eyed as, toward the end of the book, Emilio confesses to what actually happened to him on Rakhat - his horrific discovery that such a mundane act as planting a garden could bring two alien species into violence against each other, destroy most of his friends, and catapult Emilio into a sexually submissive nightmare he had no hope of waking up from.

The author's voice does a great job of foreshadowing terrifying events throughout the novel which the reader can only speculate about until they actually occur. For example, when the author mentions that had Alan not died, he might have been able to warn everyone to be careful around Supaari, one of the alien characters. This foreshadowing is put in perfect spots throughout the book and sets up great intensity as you read and wonder what's going to happen between all of the characters. In the beginning of the book, you are made aware that Emilio's entire team perished and he is now the only survivor, but learning how each member dies - in nearly all unexpected ways - kept my interest throughout the whole novel.

I think the lynchpin that made the whole book interesting and terrifying and beautiful at the end was the fact that it was a simple garden that turned everyone's 'world' upside down. I love the theory that if you were to travel back in time, the simple flap of a butterfly's wings can alter the course of entire histories. In that respect, The Sparrow brings across, quite successfully, the fact that if one simple thing is altered or disturbed on an alien planet - a planet we humans know almost nothing about - it can cause a chain reaction leading to the very destruction of civilizations.

When first arriving on Rakhat, Emilio and his crew were incredibly careful about disturbing the ecosystem. But once they settled and realized much of the vegetation and atmosphere is akin to Earth's, they think nothing of starting a small garden to produce food for them to live off. Little did they know it would forever alter the destiny of the small Runa village they took residence in. I absolutely loved this inclusion in the book. It really tied everything together. As did the fact of how horrific the themes behind the music Earth's observatories picked up really were.

All in all, The Sparrow constantly surprised and delighted me. The story pulled at me, tugging me along to areas I wasn't sure I wanted to go, but once I was there, I was comforted by the fact that the characters questioned the same things I questioned, such as why God would bring so many people so far down a particular - very particular - path, only to allow them to be destroyed in the end.

I'll end this review with a great quote from the novel, spoken by Emilio during his inquiry by the Jesuit order - “Do you think so, John?  Was it your God?” he asked with terrifying gentleness.  “You see, that is my dilemma.  Because if I was led by God to love God, step by step, as it seemed, if I accept the beauty and the rapture were real and true, then the rest of it was God’s will too, and that, gentlemen, is cause for bitterness.  But if I am simply a deluded ape who took a lot of old folktales far too seriously, then I brought all of this on myself and my companions and the whole business becomes farcical, doesn’t it.  The problem with atheism, I find, under these circumstances,” he continued with academic exactitude, each word etched on the air with acid, “is that I have no one to despise but myself.  If, however, I choose to believe God is vicious, then at least I have the solace of hating God.”
Posted by Unknown at 8:00 AM