Awakening Evarun and the Appeal of Short Story Series 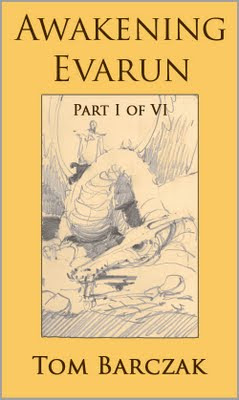 I recently had the honor of reading the first installment in Tom Barczak's new short story series, Awakening Evarun. If you've never heard of Tom Barczak, I can understand. Awakening Evarun is his first 'published' piece of work, but I found this debut piece of fantasy to be quite entertaining.

I had the opportunity to speak with Tom on the phone a while ago and we had a chat - author to author - about how we found the idea of short story series to be quite compelling. I think in this age of self-publishing, with authors having control over every aspect of their work, it's neat to think in terms outside just writing novels.

I've always been a huge fan of the Star Wars universe. Although I love the writing of most of the authors that are given the privilege to write books in the series, I have always been more enamored with the simple aspect of diversity. The Star Wars universe started with a group of main characters and has branched off into a whole universe of fictional goodies. Novellas, short stories, cookbooks, merchandise, novels, movies...the list goes on and on. It's easy to pick up a book and read it, understand what's going on, and want to dive into other parts of the universe.

I've had plans in the works for a couple years now to start an episodic short story series called the LZR Project. I have five or six drafts of episodes done already and am hoping to resurrect this project and start writing on it again this next year. I did the episode thing with my novella, Picture Perfect, before I combined the episodes into book format. I just like the idea of readers being able to bite off little chunks of a grander story here and there, weeks or months at a time. It's a nice diversion to keep my readers entertained while I continue to carve away at the novels, which take considerably more time and effort.

In that regard, when Tom told me he was wanting to try out this short story episode idea, I was excited. Especially considering he is also a talented artist who is illustrating parts of these stories.

Check out the first installment of Awakening Evarun if you get a chance. It's well worth the $2.99. Below is my review.

Awakening Evarun is a great start to what Tom plans on being a six-part short story series. The pace of the story is easy and intriguing, making it a quick read that feels satisfying, yet leaves you wanting more when you're finished. Tom's writing style is definitely a gift and I look forward to more from the author.

I have a copy of this book sitting on my Kindle right now waiting to be read. I love short stories as they are a nice quick read in between the large epic fantasy volumes that I read (and love).

I just now got to read your post and review. Thank you so much David. As always, you are a good man.

Hope you enjoy the story, Scott. I would love to hear what you think of it.

And Tom, anytime. You are a talented writer who I hope gets recognized for your skills.