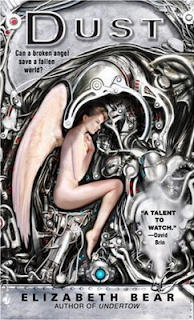 When I first saw Dust in my local bookstore, I put it on my list of 'want-to-read-later' books. The description -

On a broken ship orbiting a doomed sun, dwellers have grown complacent with their aging metal world. But when a serving girl frees a captive noblewoman, the old order is about to change....

Ariane, Princess of the House of Rule, was known to be fiercely cold-blooded. But severing an angel’s wings on the battlefield—even after she had surrendered—proved her completely without honor. Captive, the angel Perceval waits for Ariane not only to finish her off—but to devour her very memories and mind. Surely her gruesome death will cause war between the houses—exactly as Ariane desires. But Ariane’s plan may yet be opposed, for Perceval at once recognizes the young servant charged with her care.

Rien is the lost child: her sister. Soon they will escape, hoping to stop the impending war and save both their houses. But it is a perilous journey through the crumbling hulk of a dying ship, and they do not pass unnoticed. Because at the hub of their turning world waits Jacob Dust, all that remains of God, following the vapor wisp of the angel. And he knows they will meet very soon.

- and the cover did enough to spark my curiosity. It wasn't until I actually obtained this book and then put it on my 2012 Reading List that I realized it was merely the first in a series of three novels. And needless to say, I won't be reading the other novels.

If you go to my Goodreads list you'll see I have quite a few books with five-star ratings. I give a book five stars if it kept me interested all the way through with compelling characters, interesting story lines, and plausible events. Even if a book has some flaws, it can get five stars from me if I think the author broke out of the traditional genre box and brought something new to the page.

I also have a few books on my list that fall below three stars. These are books I haven't finished - nor care to, books that are so moddled and uninteresting that I feel my life points slipping away just making the effort to finish reading them.

And Dust ranks there, below the three-star line. Although I'm not certain if I want to give the book one star for all the areas it lacks in or two stars because the story's idea is somewhat original - if one is actually able to understand the idea/plot this book is trying to convey.

The first chapter or two of Dust hooked me. Perceval, an angel (I take it) has been brutally stripped of her wings and captured. Rien, a maidservant, has been put in charge of caring for her. Even though they are enemies, the girls take a shine to each other. At first I thought it was simply a friendship kind of shine, but later I find out they are actually in love with each other, regardless of the fact they are sisters. Oh, when I said love, I meant a sexual kind of love, not a sisterly kind of love. There's a very strange incestuous, same-sex kind of romance theme running through the book, one which I didn't completely follow as I didn't think it added anything to the story itself.

Anyway, I'll brush past that point and move along to the rest of the book. Once Rien realizes that Perceval is her sister, she frees her and they flee to warn others of a coming war. And then the book lost me. Apparently the world is named Jacob's Dust, and is actually a derelict ship parked a bit too close to a pair of stars, one of which is about to collapse and destroy all that's left of creation. There are angels, which are actually programs or pieces of an AI - I am guessing. I felt The Matrix slipping into the storyline here and there, but it wasn't within understandable terms. There are creatures that are completely robotic, species that are symbiotic, and a strange man/woman named Mallory who makes strange man/woman love to Rien - something that I felt was as completely out of place in the storyline and about as random as the ambush sex scene in the first Bloodrayne film.

I couldn't get past the convoluted storyline and the cardboard characters - which I found I cared nothing for. I didn't care if Rien died. Or if Perceval was ever freed. Or even if the world, Jacob's Ladder, was destroyed in the end. Past all of that is Elizabeth's absolutely clunky writing style. First, I literally had to have Dictionary.com up when reading this book because of the vocabulary she uses. Second, her writing felt jilted at times. Just. Like. This. At other times, it flowed with the beauty of a soaring eagle. Those were the only times I found myself breezing through the book. All other times I found myself having to stop, reread paragraphs, sometimes entire pages, to understand anything about what was going on. (And I still don't understand most of it.)

And even in the end, with its lackluster semi-battle scene, I found myself rushing to get done with the book so I could move on to the next one in my reading list. There were a couple times I almost threw the towel in and put the book down for good, but figured the novel was short enough for me to read it through to the end so I could write a proper review.

Anyway, like I said before, as much as I hated this book and the time it sucked from my reading agenda, I found the overall premise - of what I understood of it - to be somewhat original, although poorly executed. So, two stars it is. I won't be reading the other two books in the series, nor would I really recommend this.
Posted by Unknown at 8:00 AM

Ouch. I guess even celebrated authors can put out a less-than project.

To be fair, Catherine, this is the first and only thing I've read of Elizabeth Bear's. I just didn't really care for it, but I think if it was easier to read and I had come to care about the characters more, I might not have been so critical. Have you read anything of hers?