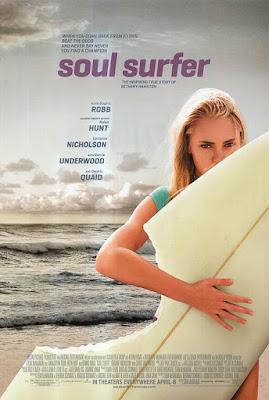 Normally, I don't like to post movie reviews on my blog. Unless special circumstances exist, it's actually rare for me to care enough about a film to spend my valuable time just writing a review. That said, I absolutely had to let everyone know what I thought of Soul Surfer, the true story of award-winning surfer, Bethany Hamilton. Don't worry, there won't be any spoilers in this review. The movie doesn't officially release until April 8th.

Starring AnnaSophia Robb as Bethany Hamilton, and Helen Hunt and Dennis Quaid as Bethany's parents, the movie boasts an impressive cast for a faith-based film. There are even appearances by Kevin Sorbo, Craig T. Nelson, and Carrie Underwood.

Soul Surfer chronicles Bethany's love of surfing, her attack by a tiger shark in which her left arm was bitten off - almost killing her, and her rise from the ashes back into professional surfing. Through her fall and rise, Bethany learns that her true purpose in life isn't necessarily surfing, but to love others. The movie contains very clear references to Bethany's faith in God and Christ, and the questions she faces after losing her arm and beginning the long road back to a 'normal' life.Her story is definitely an encouraging one, and I think it will move many to rise above the odds to reach for the dreams they so desperately want to achieve, regardless of the adversities that life throws our way.

AnnaSophia shines in this film, along with her supporting cast. I didn't realize until I looked it up on Wikipedia, that AnnaSophia was Violet Beauregarde in the 2005 remake of Charlie and the Chocolate Factory and Leslie Burke in Bridge to Terabithia. She does such a fine job of portraying a young girl who faces a crisis head on and decides to challenge the odds and the opposition. I never tire of seeing Dennis Quaid in a film - I've always believed he would make a great Indiana Jones, and Helen Hunt, although she is starting to show some age, plays her role beautifully as always.

Although the movie is rooted in a faith-based story, it didn't feel to me like it was drowning in Biblical references the whole time. I know that some films/stories feel their purpose is to cram a sermon down someone's throat just because they've gotten someone's attention with a promising premise. This movie does no such thing. The film has the potential to spark meaningful conversations regarding crisis, adversity, purpose, family, and friendship. Even the way Bethany reacts in the face of her relentless opponents is a moral lesson in itself, one more kids and adults alike could benefit from.

This is a great family film, but also a film to watch if you just enjoy a great, encouraging and uplifting movie. Which brings me to my main point for wanting to write this blog post...

- If Hollywood budgets and resources were given for well-written, faith-based scripts, you would get more movies like Soul Surfer -

Movies like Soul Surfer benefit from great special effects and a talented cast. Would the movie have been great without these things? Maybe. Not sure. A story can be great, superb even. But starting with a great story and trying to execute it into a film is a challenge, especially if you have a limited budget AND limited resources. Having Sony Pictures backing the superb story model went really far with this film.

Another great faith-based film that went far because of a great cast and decent studio resources was The Blind Side, attracting big names like Sandra Bullock and Tim McGraw. We need more movies like these. End of story. A positive message, great acting, and an encouraging story - you can't much better than that.

Since I don't usually do movie reviews, and in effect, don't have a rating scale of any kind, I'll simply say I give this movie five out of five stars. Soul Surfer comes out April 8th and I highly suggest - especially if you want to see more movies like this in the future - that you go see it. Support a great faith-based movie, a great family film, a great story.
Posted by Unknown at 9:11 AM

AnnaSophia Robb is my dream girl. Ever since I saw her in Bridge to Teribithia (OUTSTANDING novel by the way)I've been head over heels for her :P

Amazing movie, my Dad taught me to never cry buyT 7 times I cried at this preview ! Wow, the chemistry between Dennis and Helen and with their family exceeds any movie that I have seen in the last ten years !

Anonymous, if you cried during the preview, you'll be sobbing in the movie.

And William, sounds to me like you need to call up AnnaSophia for a date. LOL! :D

Great movie! Thanks for the movie review and trailer. Amazing and dramatic movie for the family. Good week!