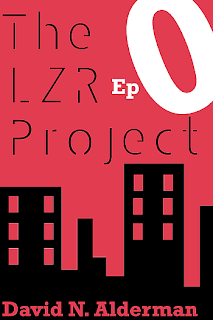 The first episode (Episode #0) will be released Tuesday, March 4th as a digital download. I am considering using Gumroad for the release of each of my episodes, but I'm not certain about that yet. I'd imagine the price for each episode will be around $1, and episodes will probably be released on a weekly basis, possibly every Tuesday. Once all episodes have been released, I'll turn around and publish the entire series in paperback format. Also, originally I wanted to take episodes down after they were up for a couple weeks to force people to purchase the paperback at the end if they wanted to catch up, and I think I'm going to scratch that idea and keep the previous episodes up as new ones are released so anyone can catch up at anytime.
Posted by Unknown at 3:02 PM

This sounds good to me, David!!

Thanks, Peter. I am really excited about this project, as some of the storyline actually helps somewhat to bridge some of the gap between the two novel series.