Wolves of the Calla - Book Review 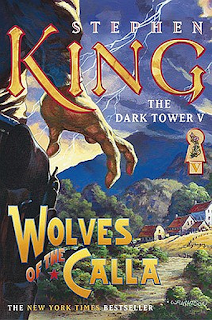 Wolves of the Calla is the fifth volume in Stephen King's Dark Tower series, and in my opinion, a decent addition to the collection. The plot finds Roland Deschain and his ka-tet arriving in Calla Bryn Sturgis, a collection of small communities ravaged by horrible beasts, known as wolves, who swoop in from Thunderclap - a nearby place of darkness and lightning - and steal one of each set of twins that reside in the area. These kidnapped children are carried off to Thunderclap, and when they return they are mentally inept. Roland and his group are called on to help the town make a final stand against the wolves, and the majority of the book revolves around the preparations made to fight the wolves and the mysteries surrounding the wolves themselves.

I found myself fairly interested with most of the story, and I think King did a great job expanding on the main characters, even with the addition of the demon baby (the chap) who Susannah is about to give birth to - which of course only complicates the battle with the wolves and Roland's overall quest to find the Dark Tower. This volume in the series also sees the addition of Father Callahan, the priest from Salem's Lot. His character is wonderfully fleshed out, sometimes though a bit more than I care for. As per King's usual habit - at least from what I've seen from the books I've read - some of the character exposition gets a bit lengthy and drawn out to the point of boring. There's only so much I really want to know about Callahan's life, and it felt like some parts of the book dragged in this regard. Not enough to make me stop reading, but I did find myself taking a break here and there while I attempted to trudge through those parts.

A good portion of the book also revolves around Eddie and Jake's attempts to travel to alternate realities to attempt to protect a bookstore owner who actually owns the piece of lot that the rose - possibly the Dark Tower itself - resides on. These scenes kept me interested with their mystery and magic, and reminded me why I enjoy the Dark Tower series so much.

Even though I enjoyed the book as a whole, I can't say I really cared for the end battle with the wolves. It felt rushed and ended quite quickly, making me wonder what all the preparation was really for. The wolves didn't seem to offer up any challenge to Roland or his team, and it felt like a big let down. The novel does end on a cliffhanger, obviously opening up the plot for the next book in the series.

I'm going to give this one four stars because I felt the book dragged in some places and had a lackluster ending. Overall though, I think it was a great addition to the series, and I look forward to continue reading Roland's journey to find the Dark Tower.
Posted by Unknown at 8:00 AM